There’s a delightful Italian saying that translates roughly as “this is so good you will lick your mustache”–an expression, I’m told, that works across age, gender, and subject. I’ve been feeling this way about the chance to design a long scale tenor ukulele for Kimo Hussey.

Excellent long scale tenors are made (Lichty, Kanile’a and others), but I wanted to design the entire instrument around the 19″ scale rather than put it on my standard tenor body. This would add resonance, sustain, complexity, and power to more fully render what the (naturally higher tension) long scale was contributing. Kimo was enthusiastic with the direction, so I plunged ahead.

Pulling out plans for great classical guitars by Hauser and Romanillos (plans 12, 30, and 33 for the curious), I noticed that the scale–starting from the 5th fret, equivalent to tenor C6 tuning–was just over 19″, right where Kimo likes it. Taking that as an omen, I ran down to Fedex and reduced those plans to the new scale length. 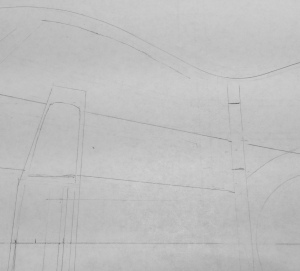 Studying them alongside existing long tenors, I began the alchemic process of creating a body/bracing plan; radical shape or not?; computing string pull; adjusting the sound hole and transverse bars to define the primary resonating surface; open harmonic design?; a little more fullness here if the bridge goes there; fairing the curves so the wood will take the shape without tension; testing ideas with luthier friends and mentors, and on–sketching and shaping bits of wood and paper until a form emerged with an appealing balance, technically and aesthetically.

Comparing it to my current tenor plan, they were clearly siblings, no surprise I suppose as the same technical considerations and sense of allure guided my original tenor design. Yet subtle differences between the siblings exist, which makes me happy–what if I could have simply photocopied my current tenor plan at larger scale and saved all that work?

What to call it? “Super-tenor” and “long scale tenor” normally refer to a 19″ scale on a more or less standard tenor-sized body. It quickly became apparent that a body designed around the 19″ scale would be about the size of the baritone uke. As a baritone singer, I was drawn to the name “lyric baritone”, a singer’s description for a baritone with a higher range and generally lighter and sweeter quality (not my voice, sadly). One tiny problem–no one would realize from the name that it’s a tenor uke. Scratch.

Borrowing again from guitar history, we settled on grand tenor, a naming convention signifying a step up in size and power. I’m concerned that “grand” sounds a little bit, well…grand. Holding a mockup in my hands, it doesn’t feel big or flashy; it feels balanced and sweet, with the charm and friendliness that so appeals to me about ukes.

In the meantime I’ve already shortened it to GT to save keystrokes, though GT now makes me think of Mustangs (the car). However, I learned to drive in my mom’s powder blue ’66 Mustang (not a GT), a nice memory, so I think it will be OK.