Ah, Wood—at any moment liable to spark poetry or argument—how shall we choose thee? An ocean of thoughtful descriptions, fervent testimonials, “magic wood” lore, and intricate processes awaits the curious. I suggest, however, that you focus directly on the visual, tactile, and tonal qualities that you want.

I list tone last not because it is least important—au contraire!—but because it makes sense to see if woods that catch your eye can also create the sounds you want. Visuals are an entirely legitimate part of our relationship with instruments. Furthermore, wide tonal variations often exist within a species. Using this, I shape the sound with a thousand choices (more, really) throughout the process to create projection, responsiveness, expressive range, clarity, sustain, and delight across a variety of woods.

The most effective way to learn how woods can sound is to hear them in good instruments; in person is super, while recordings are often more practical. And don’t worry, if a wood seems unlikely to give you the results you want, I’ll tell you. So go ahead—start by seeing what woods call to you. We’ll chat and listen to music to refine the search, then look at individual sets to home in on something wonderful. Preparing you in advance for a soapbox I often climb onto: it’s about the individual set, not the species!

This is an unusual place to start, but the urge for spectacular wood is strong, and for longevity (and sometimes tonal) reasons, the wildest wood is often best used as jewelry rather than structure. Understated clothing with killer jewelry–it just works.

Ziricote with gold mother of pearl. Reminds me of Palouse hillsides.

The headstock overlay, rosette, end graft, and back stripe are four excellent places to make a statement.

“You really know how to pick out my nicest sets of wood.”  (F. California)

Volumes are written about the tonal effects of various back and side woods, but while there may be statistical (and, frankly, marketing) utility to some of these assertions, the effects of scale length, body design, top wood selection, builder decisions, string choice, and player technique are vastly more important. Furthermore, individual boards of the same species–even consecutive cuts from a single plank that are visually identical– can vary widely in sound. Help me understand your playing style and desired sound, then I can guide you toward good options.

There are numerous other things a luthier considers in collecting and using wood, including critical factors in how the wood is sawn and seasoned, and long term reliability with certain types of figure (fancy visual qualities). I’ve already rejected wood that I don’t trust or like, so unless you are very sensitive to some issue (I’m allergic to cocobolo, for instance), don’t worry about them. I say…

…start with your eyes!

Myrtle–mostly from our own Oregon coast–is splendid: lustrous and often beautifully figured, medium in weight…but a heavyweight when it comes to making a wonderful sounding instrument.

Needing no introduction as traditional and outstanding woods for guitars, these can also make fantastic ukes. With yummy colors and intricate patterns, these heavier woods will add a few ounces of weight to the instrument, which may balance the neck better if you use any but the lightest tuners.

With many species–and reams of opinions everywhere you turn–don’t fall down the rabbit hole of trying to predict tone based on the species. The individual set, and (far more important) how it is combined with the top wood and other elements will dominate. Speculating about tone based on species can be fun–hey, I do it too!–but let’s just say there are a lot of empty calories:-).

The archetypal wood for ukulele, I have a small selection of remarkable master grade sets. Lustrous and figured almost beyond belief, I don’t emphasize it more because I feel somewhat guilty competing for this wonderful resource, which grows only in Hawaii.

I have quite a few other woods, tropical and temperate, all capable of making a sweet instrument, but more than I can write up now. Woods can be surprising: I made a tenor uke using oak from a historic local tree (combined with Engelmann spruce) that sounded marvelous, with huge sustain, warmth, and resonance. Ask about other woods if you’re interested.

The top is widely considered the voice of the instrument; choosing good wood (including the braces), building to its potential, and playing it lots are all big factors in how an instrument will sound. Many different woods have made good instruments, but I have favorites. 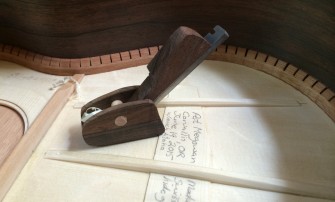 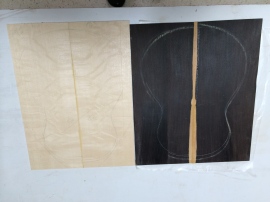 If I could only pick one, spruce would be it. Good pieces are a Goldilocks blend of responsiveness, power, richness, resonance, clarity, expressiveness, dependability, and beauty. Amazingly, it typically gets better sounding year after year for decades, as well as warmer in color.

There are several species, and even more varieties and regional specialties. Swiss spruce (often moonwood) is consistently a great performer, and Engelmann is another dreamy choice. As always, the individual set is more important than the species.

Since I am asked occasionally, I’ll cover it here: I don’t build with what is commonly called Adirondack spruce (actually two species). Famous in vintage instrument circles for steel string guitars and mandolins built 80+ years ago, it is also famously slow to develop tonally. For my approach to building, there are far better choices for hot rod uke performance!

Spruce is quite light and bright in appearance, often with lustrous cross grain silking. If you like the tonal qualities but want a deeper/mellower color, spruce takes dye stains very well. This opens the door to beautiful single tones and sunbursts, from palest amber and honey-burst to screamin’ cherry red. As for “vanilla”–btw, among the world’s most expensive spices!–read on.

Can’t have too much…

Bearclaw is a type of figure (fancy appearance) in some softwoods. While I am quite cautious about figured woods for instrument tops–the top is under a lot of stress around the bridge in particular–bearclaw passes the test of time with long use in great classical guitars. The sets I have sound great, so I embrace the glory!

If spruces weren’t so amazing I would be a slave to sinker redwood. Actually…I AM a slave! The appearance and tone of good sets are mesmerizing, and it typically plays to its ultimate potential sooner than spruce. A different voice than spruce, you’ll probably know by playing which one you want. Try to have someone play for you as well as playing it yourself, so you can hear from both the player and audience perspectives.

Called “sinker” not because it’s so heavy, these logs were pressed into river bottom silt by the weight of other logs as they piled up behind temporary dams. Ancient trees to start, then reclaimed after 100 years or more underwater, they can be very rich and distinctive. They frequently sport mineral coloring, and the sets I have are harder and stiffer than ordinary (non-sinker) redwood.

Native to a tiny strip of coastal Oregon, very stiff, long sustain, highly fragrant, and prized among other things for Japanese temple building, POC is a very fine wood. Your uke case will be fragrant forever!

Western redcedar is another outstanding wood, admired for developing a full warm sound sooner than spruce. Relatively soft, it wears more easily from right hand contact, especially percussion techniques. There are effective ways to address this, including tap plates, pick guards, and thin plastic film that stays in place from static charge.

A word on hardwoods

Traditional for ukes and often quite flashy in appearance, medium density hardwoods like koa and mahogany can be fine top woods. Typically less responsive in the higher frequencies, they are often described as being “warm” in sound.

Softwoods, however, are capable of great warmth if selected and built with that in mind. More important, softwood tops (for my taste) better combine warmth with excellent clarity, projection, and a wide tonal and dynamic palette. For these reasons I build with painstakingly selected softwood tops.

Lustrous and stable, Honduras mahogany is great stuff, the mainstay of old Martin ukuleles and a zillion great guitars. The color gets so rich over time you may want to nibble on it…but don’t. 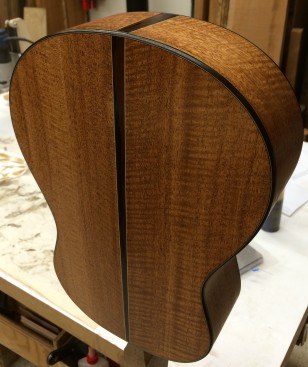 Not just a great top wood, it also makes a super smooth neck. Harder to get in neck sized billets, it may not always be available.