Long ago I got a a few small planks of Palisander (Dalbergia barroni most likely), including one with volcanoes. Having seasoned them for a good many years, I cut some recently, with a good deal of trepidation to start. This is the volcano plank:

The worry was misplaced, it sawed like butter and stayed perfectly flat and tame. And what colors and graphics!
It’s too narrow for 2 piece tenor ukulele backs, which is perfect!–I’ve been wanting to do three piece backs for ages, inspired by my beautiful Don Musser steel string.
Here are a few of the combinations I tried, starting with bookmatched volcanoes and quilted maple between: 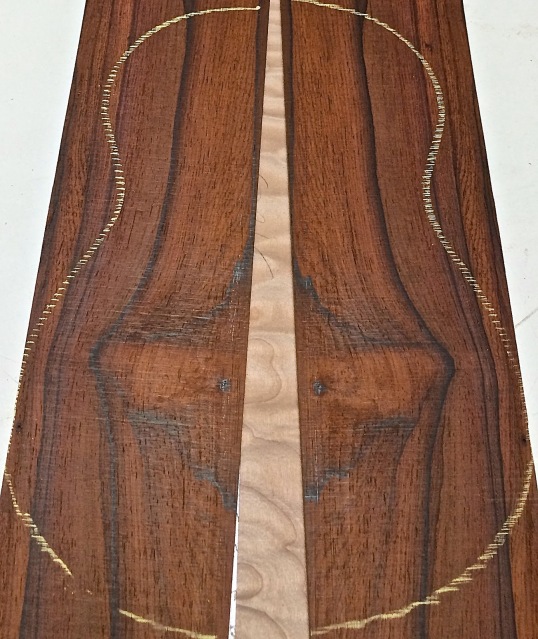 Opposite approach, ebony instead of maple, with chalk to simulate pale stripes between the different woods: 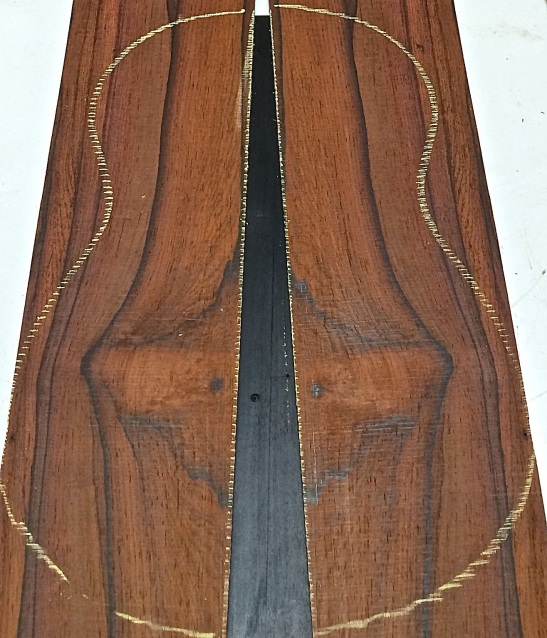 What about a single volcano surrounded by darker palisander from a different tree?

And tie-dye! Amazing “tiger” myrtle from the same tree as the end graft in the previous post, with the darker (volcano-free) palisander:

A different pair of volcanoes–though more like Belknap crater to the previous North Sister–and how about blackwood with a simulated sapwood stripe? You can see actual sapwood at lower left center.

From my lethal wood collection, wenge, savage with burrowing splinters. 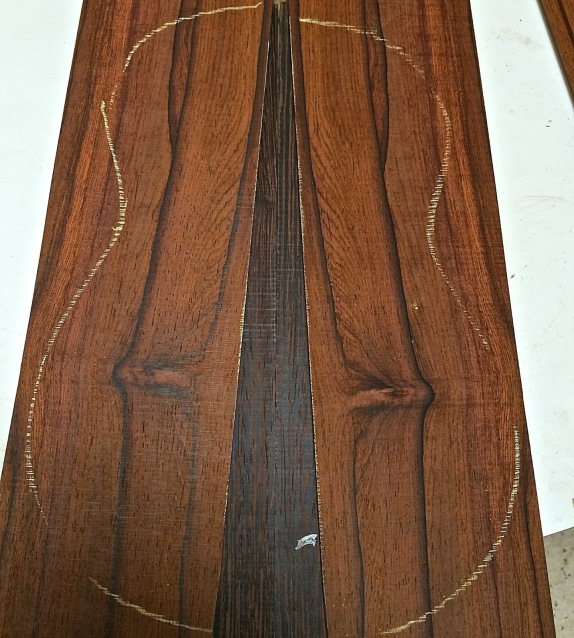 Wouldn’t you know it, the cruelest wood looks great. It turns the rosewood color scheme inside-out; the rosewood is mostly warm brown with picturesque black lines, the wenge is dense with black lines interleaved with subtle browns.
Back to the wood shelves–maybe some Morado, or a bit of Macassar ebony, both of which are far kinder.

Composing–figuring out which pieces of wood, cut which way, combined and arranged this way or that, will fulfill all the functional needs, celebrate the materials, and bring delight to an instrument or piece of furniture–is one of the best parts (and most crucial) of my work.

The wedge shaped end graft in the picture is some super-amazing myrtle from the southern Oregon coast, combined with oak from the historic Hackleman grove via the Lumber to Legacy project spearheaded by Mark Azevedo and Albany Parks and Recreation; see the story here: Lumber to Legacy.

Yes…it’s an oak-ulele, to be auctioned later this fall along with contributions from many other regional craftspersons and students to raise money for oak habitat restoration.

I love the way these look together, with a bit of black/white/black purfling to draw the eye to the transition. The oak has strong straight grain with squiggly pale lines called “ray fleck” (from the ray cells, which help make oak split easily for firewood); the myrtle varies the theme with squiggly dark lines, and adds a soft undulation to the dominant straight grain of the oak.

It often takes a shockingly long time to arrive at a satisfying combination, at least shocking when I’m fretting that progress only happens when cutting, joining, gluing, and shaping wood. But the time spent imagining the insides of planks or burrowing in wood supplies for yet another candidate pays back a thousandfold, not just in the finished project, but unleashing the energy and perseverance I need for the seemingly infinite number of operations, detours, false starts, and train wrecks that inevitably go with building things well.

All in all a pretty good return for a 3″ slip of myrtle, a fragment from an orphan ukulele side. It makes it darned hard to get rid of scraps though.

7:30pm, day three, Guild of American Luthiers convention, Tacoma, Washington. Where seemingly well-adjusted folks who make musical instruments poke their phones inside of other maker’s guitars to see how they’re put together…

Kimo Hussey, a master of the ukulele from Hawaii, is jamming with Jay Lichty, who makes beautiful ukes and guitars from (as he puts it) “that hotbed of ukulele music, Asheville, North Carolina”. Kimo is playing one of Jay’s ukes, and the night before had given a concert with it.

I’m carrying the first ukulele I built, having just come from the exhibit hall where I have a display table alongside many real luthiers.

[I am so insecure at the exhibition that my table was mostly covered with woodworking tools; I taught folks how to quickly sharpen their planes and scrapers to a high standard, something I do daily in the shop and teach almost non-stop when I work Lie-Nielsen Hand Tool Events. My uke was wedged over to the side, constantly at risk of being splattered by swarf (a muck of water, iron filings and abrasive particles generated during sharpening on waterstones).]

Kimo and Jay are making great music–swing tunes, pop, rock, you name it. I’d like Kimo to play my uke, but no way I’m interrupting. There’s a lull, my heart rate doubles…but I keep my mouth shut. They play some more. 7:50, time to pack up soon for the evening concert.

If not now, when? There’s a tiny lull, and my voice cracks as I ask Kimo if he’ll play my first uke. He says “you mean you want me to help christen your first ukulele?”. I manage to blurt out yes, that’s it exactly. He says “I’d be honored to help christen your uke”. I try not to let my jaw bounce off the ground, pull it out of the case, and he looks it over closely before starting this:

Wow! I was walking on air the rest of the evening.

No blog entries for nearly two years, and it’s tempting to craft an excuse. To be clear, it was my daughter’s dog, Loki–with a name like that he’s obviously guilty. You can see it in his body language: 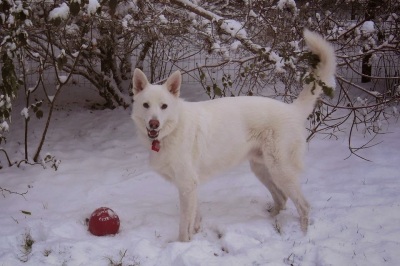 Alright, it’s not Loki. It’s been an intense period, with a painful injury in the shop (no missing fingers thankfully) and a difficult recovery, a marriage in the family, an untimely death, and the crux of a long metamorphosis–actually, more than one.
One involves lutherie: making and working on stringed instruments. I started nearly 40 years ago, but made some horrible choices on a beat up but innocent Gibson Melody Maker (electric guitar)–even now I feel shame.
Instrument making has been stalking me ever since, though I evaded it by channeling the impulse into other design areas. It cropped up nonetheless, with instrument references and materials sneaking into my furniture designs, such as this 2005 piece:

Again and again woodworking mentors and friends told me to quit fighting, that my instincts and abilities pointed obviously toward lutherie, but fear dominated year after year. No matter that I designed and built pieces that were at least as difficult as a guitar–by this time I had convinced myself that one needed a “Stradivarius gene” in order to build a beautiful sounding instrument.
Life, however, continued to lay groundwork.
My good friend Tom Dufresne, physical therapist and trainer extraordinaire for the Nebraska women’s gymnastics team, and my most influential guitar teacher, visited my shop and concluded that I should build instruments. This was…terrifying…because historically when Tom said something like this it was essentially impossible to avoid even if it appeared impossible to accomplish.
Then I became friends with Lynn Dudenbostel, who makes mandolins and guitars that shake the earth. His mandolin no. 5 (!) was Chris Thile’s primary instrument (!!) for many years and recordings, though it now shares space with Dude no. 15 and a Loar. Lynn looked at my woodwork and put it to me simply one day at the Mandolin Symposium–“you can do this!”.  No Strad gene excuses.
I went to the handmade instrument show at Maryhurst (in Portland) each year, and the Guild of American Luthiers convention, where I discovered repeatedly that delightful instruments were made by a wide variety of people, not one of whom appeared to rely on supernatural assistance. They too were generous and encouraging. I bought good wood. Then some more.
But I didn’t build. Some stubborn part of me still didn’t believe. Instead I built even more challenging furniture, with gentle curves everywhere (like an instrument), touchable surfaces and modeled details (like an instrument), and re-purposed instrument wood (alright already).
The shop injury finally pushed me into it. My shoulders were almost useless, so I couldn’t handle the large timbers needed to work on my furniture commissions. Staring dejectedly one day at the wall of huge planks that line my bench room, someone/thing quietly said “musical instruments don’t weigh much”. Fate, guardian angel, subconscious?–I don’t know, but it was as if it was said to me. Another (less sanguine) suggestion took shape later; “take the hint–there are worse injuries if necessary”.
Now that sounds ridiculous, and it’s true that the shoulder injury was wreaking havoc with my sleep, but that’s how it came across to me. So I took the hint and built an ukulele, because Tom said he preferred it to a mandolin when I gave him the choice. I fought it all the way, but completed it out of desperation when I realized there was nothing else to enter in the annual show of the local woodworking guild.
Here it is catching morning sun in the shop:

It sounded terrible to me, though others argued otherwise. Then I heard someone else play it, and–wait a minute!–it sounded good, nicer (to me) than the instrument he had just given the concert on. It wasn’t the worst ukulele ever! This was confirmed at the Langley workshop, a Canadian ukulele orgy (if you can imagine) where gurus like James Hill, Peter Luongo, Chalmers Doane, and Gordon Myer of Mya-Moe put no. 1 under the microscope and offered congratulations, advice, and encouragement.
So naturally, I began to doubt that I could do it again. The 2nd instrument slowed, then stopped.
Rescue came from Hawaii, in the form of uke and classical guitar maker Woodley White, and performing legend Kimo Hussey, both of whom attended this year’s Guild of American Luthiers convention in Tacoma–the subject of a forthcoming post.