Well before dawn one rainy Tuesday last November—“depression month”, when Oregon rains begin in earnest and the daylight hours shorten by half—I arrived at Portland airport with a green backpack and two ukuleles.

I was bound for O’ahu; the Ukulele Guild of Hawaii Exhibition at the Moana Surfrider on Waikiki beach, with a brief visit to the north shore beforehand. Honolulu, Waikiki, Diamond Head, Hale’iwa, the North Shore during surf season—a dream trip.

But I wasn’t feeling it. I wanted to exhibit of course, meet great ukulele makers and players, see fine instruments new and old, and (for my goal-oriented self) see just how high the bar is set in the ukulele world. But the anticipation of major travel stresses me out no matter how good the destination sounds in theory.

The flight took 1500 hours as I recall, during which hundreds of movies played simultaneously on screens on every side. I consumed cup after cup of orange juice, including the ice cubes, but none of the little Chex’n’pretzel packets.

Sunshine. Warm soft air. Birds and flowers. Rainbows in profusion. A food cart waffle-n-fruit breakfast watching squalls over Shark Cove, moving as I learned where the canopy would intermittently unload rainwater. The great folks at the Ukulele Site/Hawaii Music Supply and Ko’olau. Albatrosses slicing a wind that tried to blow me off Ka’ena point (the westernmost tip of O’ahu), whipping the ocean to a stern blue-gray as it hurtled toward Kauai.

After the relative peace of the north shore, Honolulu was intense…but not nearly what I had built up in my mind. There were a prodigious number of tourists, but by staying at a backstreet AirBnb and eating at small local joints it was manageable. Two cafes with good baristas within walking distance assisted this urban transition.

The Exhibition itself was an enjoyable blur of activity, and the people were so kind it felt like a massive expansion of my family. The ukes were amazing. Hot and cold running music, workshops, meals, jam sessions, conversations.

By the end I was saturated—ready for a zen garden or empty beach—when a good friend said we have to check out the kanikapila on Waikiki beach. I managed to avoid whimpering, barely. We made our way to police station, took a right turn toward the water, passed the window with six kinds of ahi poke, almost to the sand…and discovered them tucked behind the building.

“Them” was a group of folks in a dis-array of chairs and picnic tables, as if waves had deposited them among the bike racks and surfboard concessions behind the police station. Despite shorts and a camouflaging old Hawaiian shirt I felt conspicuous; this was a local group. I sat at a picnic table discreetly tangent to the circle.

After each song the next person would name a tune, working in this way around the circle. Several played uke, including a blind woman who as far as I could tell never missed a chord change. Most folks sang, mostly in Hawaiian–a local man joined my table and explained the songs. It seemed as if everyone knew every tune.

What mesmerized me, however, was the hula. On any given song, one or more folks would say “Oh this is a good song”, or “I think I remember this one”, and make their way to the middle; regular folks, in everyday clothes…dancing the stories of the songs through hula.

Well past dark, a group of high school girls—looking as if they’d come from soccer practice—headed past us to the beach. One of the frequent dancers, apparently a hula teacher, called out and coaxed them into the now-crowded circle, coaching and encouraging them.

As fatigue nonetheless overtook me I decided to slip away, but a local held my arm and urged me to stay–“not too much longer, and we will sing the last song together”.

The players and dancers and hula teacher and soccer girls laughed and danced and sang until it was nearly time for the last bus that could take the blind woman home.

And just as my companion had said, we gathered into one big circle, held hands, and sang (or hummed) “Aloha Oe”; and the kanikapila ended for the night. 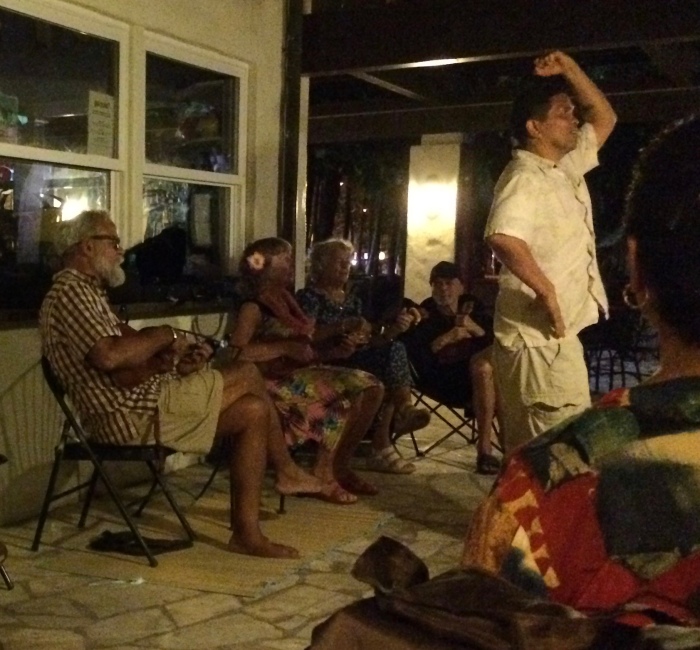