It was a really long day. 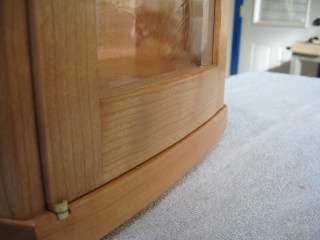 Daylight Saving Time became official just as I hit the sack; 2am became 3am on my cheapy clock radio that magically updates itself. 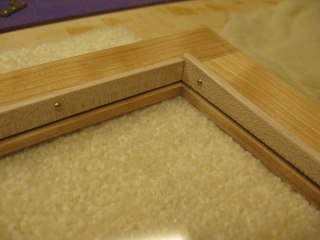 I’ve never installed glass. It was nerve-wracking as I imagined the glass ready to break at any moment.

Not the worst cabinet ever made in a week.

The funny lines on the glass are the pattern of “German New Antique”.
The pull is a temporary applied with the indispensable double-stick tape.
Yawn.
Day four suffered a picture shortage, but as planned I fit the back panel and door to the case. About 10:30pm the day ended with cutting the hinge mortises in the top and bottom of the cabinet. the router seemd scary so I used chisels and router plane, the funny looking item in the photo.

Day five was a drive toward glue-up of the carcase; detailing, prefinishing, cutting holes for shelf pins. There were a couple significant design-as-you-go decisions, both involving the top. Mid-afternoon I added a horizontal detail line around the underside of the top, shown here:

Then at 10pm during a dry run of the glue-up it became apparent that the top needed a curving top surface, so I took the completely finished piece to the bandsaw and whacked away the offending material, cleaning it up with a handplane:

A small thing with a big effect on the piece. I’ll have to refinish the top after glue up.

Then it was on to glue-up, in which I nearly destroyed the entire week of work; in spite of having done a dry run, during the real thing I glued the left side in upside down and backwards. I was breathing a sigh of relief and admiring the glued and clamped cabinet when I decided to lay the door in just to double check squareness. The door didn’t fit, not even close…because the rabbet for the back–which was facing forward in the backwards piece–is an entirely different shape.

Deciding a fight was better than setting fire to the shop, I hastily took the clamps off, disassembled two and put them back together as spreaders, and pried the case apart. It was reluctant, but finally popped. I flipped the inverted side but noticed some dowels would have to be removed and replaced in different spots. They were really stuck; as I pulled and torqued with pliers the dowel twisted like a corkscrew.

Ultimately they came out, went where they belonged and my daughter Meghan walked in to witness a victorious reassembly, which I will accept as evidence of a merciful God.

Started the day with case joinery. So far so good.

Not what we need just now.

The backup piece wasn’t nearly as nice, and after a few minutes a repair came to mind: slice off the front, slide it so the offending hole is out of the way, plane the edges for a killer fit and reglue. Here it is in clamps, with the offending hole magically moved.

While that dried I planed the curve into the sides after sawing away the bulk. Side light makes the shape easier to see.

Day ended with the first meeting of door and case. 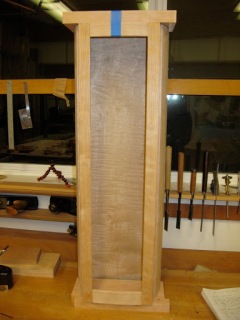 Tonight the back panel is in the vacuum press. Tomorrow the door and back need to be fitted.

I did a prototype and rough milled the wood earlier, but by the time the wood had chilled there was a week. Here’s a veneer being cut for the back panel.

And here is the wood resting up and de-stressing. It would have been nice to let it rest for a few more weeks…oh well. 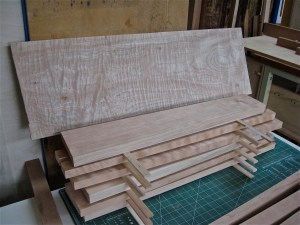 We have a whole week, let’s do a curved door. Careful layout will pay off later. 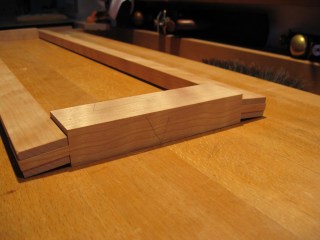 Day 2
Now we have some shape, and a chamfer w/a little movement. 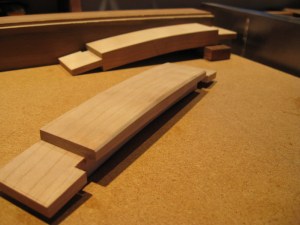 Shortening the tenon just a little makes the clamping easier. Fast, controlled, and clean with a plane and shooting board. Every home needs one. 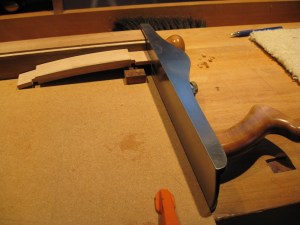 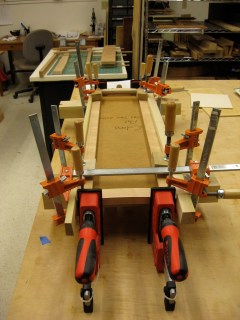 Boy do bridle joints require a lot of clamps! And so fussy to make perfect; there are many visible joint lines on a bridle and they all have to be spot on.
Used Old Brown Glue, a hide glue formulated by W. Patrick Edwards–strong, repairable, and does not impede finishes like a PVA glue…and there won’t be time to deal with finishing problems.