Ed Hodney, Director of Albany Parks and Rec, came by last week to shoot pictures of the oakulele for the Lumber to Legacy auction program. It brought to mind Tina Fey’s description of photo shoots in her book Bossypants; the apparent glamour is compromised by the feeling of your extremely tight clothing popping apart in back, straining at pins and duct tape while you try to appear hip, natural, sexy, or whatever the shots call for.

The uke wasn’t 100% complete–I was freaking out–but to my great relief it doesn’t show:

Not a safety pin in sight!

The oakulele is complete now, and the strings are settling in. After playing it and hearing a uke teacher play for me–it’s important to hear from in front as well as from the players perspective–we concluded that it sounds…juicy. The Oak/Engelmann combination (along with the zillion other choices of a build) have provided lots of resonance and sustain, a warm and legato line that would suit campanella and claw hammer playing beautifully, but with the articulation needed for sing-alongs, pop and jazzy tunes.

The auction is approaching, and we’re ready with…holy smokes, more than two days to spare! I’d better be careful, I’ll jinx it and a string will break right on the auction podium.

A little heartache while carving the bridge for the oakulele:

I could stabilize that crack by filling it with CA glue or epoxy, and make it invisible–for a while at least. Over the long haul wood moves and glue ages, and the bridge is a high stress part.

I used to get very angry over this sort of setback–how dare the wood have a crack lurking inside! However, after years of making myself calm down and re-do flawed pieces it has sunk in that the outcome richly rewards the effort, and I rarely throw the offending item across the shop any more. Building until it’s as good as I can possibly make it begets peace of mind, and provides stories of trial and tribulation to share over drinks with fellow builders! “Peace of mind”–Ha!–this deserves a post of its own; it can be very elusive when you care deeply. 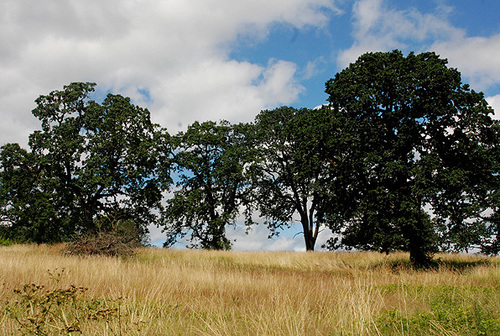 ca. 1791: Mozart completes The Magic Flute, Beethoven is a teenage piano virtuoso, and the final Stradivarius violin is 64 years old. The ukulele won’t exist for over 100 years, but its Portuguese ancestors are making folk music. Nearly half a world away (geographically, and worlds away culturally) an oak tree sprouts near the confluence of two rivers in a valley where the Kalapuya tribes have lived for thousands of years.

2013: that oak–over two hundred years old and witness to the entire history of Albany, Oregon–is felled to make way for a Lowe’s Home Improvement Center. Mark Azevedo of the Albany Tree Commission obtains the trees and carefully saws them into quartersawn lumber, the most stable and beautiful form for oak. Albany Parks and Recreation launches the Lumber to Legacy program to have craftspeople and artists turn this oak (and several others from the same grove) into fine work which will be auctioned to raise money for white oak habitat projects and local high school woodworking programs.

Spring 2014: Not coming up with any furniture ideas, I casually mentioned the idea of an “oak-ulele” to Mark.

Beware what you say around Mark.

And so the Hackleman Oakulele began. I travel home from the Kenagy farm–where the logs were milled and stored–with two rough long planks sticking out the window of my sedan at a crazy angle, holding them with one arm. Cars pass and drivers stare.

A few weeks later I plane the boards smooth to get a better look and start hunting for portions that will be sound, stable, and beautiful. This old tree is long on beauty but short on clean wood–only a few short sections appear suitable, and I cut them into smaller blanks to see how they respond. Some of those go wonky, but a couple nice sections remain:

I carefully saw these into thin bookmatched pairs, then choose the nicest to become the back and sides. 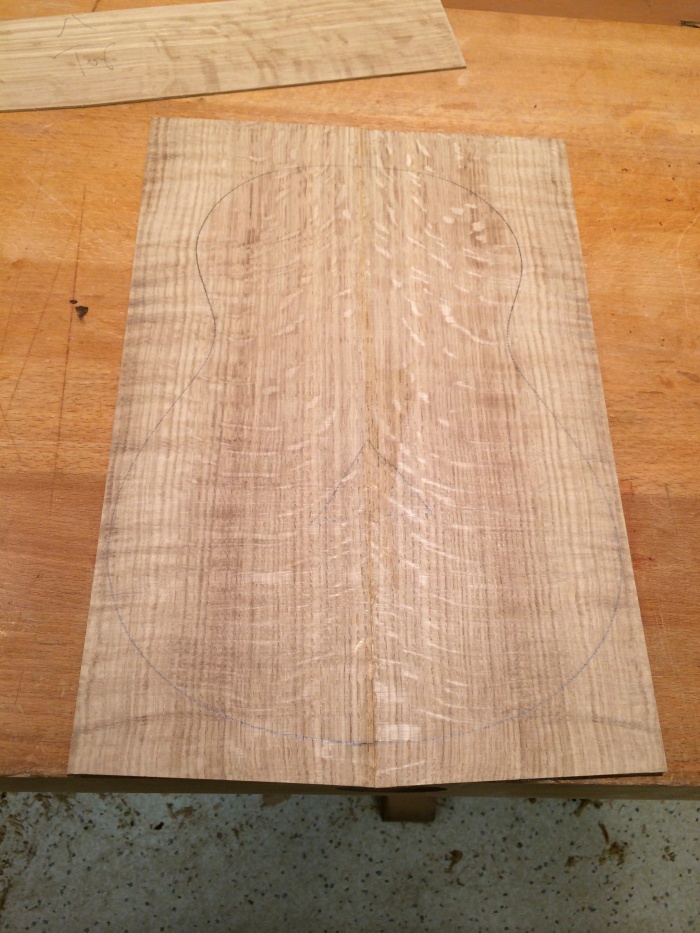 Then I let them sit around for several weeks again to see what they would do. They behaved well (thank goodness, or we’d have to start over with planks), and need only a little more refinement to prepare them for use:

The sides are joined, lined, and a pretty end graft of super cool myrtle is inlaid:

The back joins the sides in a flurry of clamps:

The top is braced. It is made of Engelmann spruce that was killed in a fire above McCall Idaho in 1992 and seasoned on the mountainside as a standing dead tree for over 20 years. It was harvested by Kevin Prestwich, a violin maker who felt it was some of the finest wood he’d ever handled. Braced with Carpathian spruce for tonal and structural reasons, glued with hide glue for tone and repairability.

Carving the neck using raking light to highlight the form, employing an assortment of carving chisels, planes, rasps, and files to refine the shape. While there are a few key measurements, most of the guidance comes from how it feels when held in playing position.

Inlaying the new moon into the ziricote headstock overlay, a summer moon for this instrument. Done with a jeweler’s saw and scalpel, very low tech. 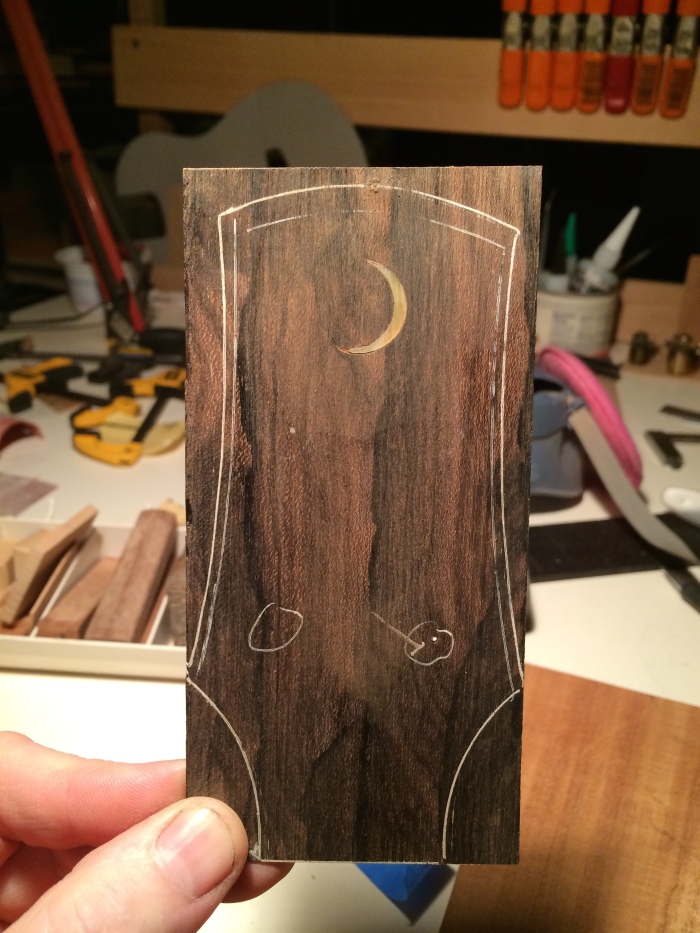 First coat of finish on the back–really pops the figure on the oak. I use an old school finish from the golden era of Martin and Gibson – varnish, with a soft glow and great tone. While not exactly the same as a violin varnish, it is similar in being acoustically excellent, nice to the touch, and not automobile-glossy in appearance.

Carving the bridge from ebony. Like the neck, after a few guiding saw cuts it’s all chisels and files.

Not long now before this wood sings again!