After nearly 4 years of chemotherapy, Ann’s lung cancer has evaded the final defenses; my love of 40 plus years is in hospice. That does not stop her however from enjoying the wonder (and shameless mooching) of Lucia, our first grandchild. 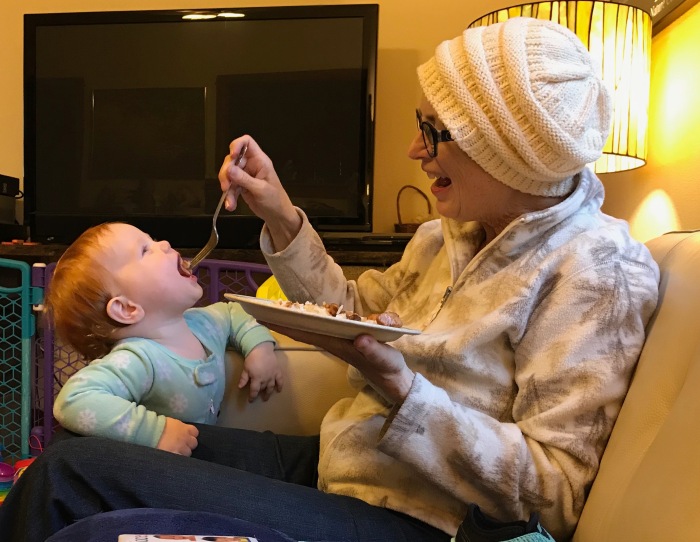 It’s probably no surprise that shop progress has slowed to a crawl, but to my patient friends on the build list I send my sincerest apology. As festival season hits full swing I so wish you were enjoying your new ukes. Several of them are boxed (i.e. have complete bodies), so lovely and responsive to the touch. I visit them, making sure the humidity is just right as they get used to being a uke (rather than a plank).

Except for this post my website, Facebook, and Instagram are languishing. You are welcome to email me, however; it’s nice to discuss our shared passion. I recently spec’d ukes for a couple of fine artists (festival organizers too, gluttons for punishment)–what a treat! One will be a new addition to my lineup, a <redacted> model:-).

Figuring out just-so woods and design details to fit a player is a joy, and plunging into the wood stacks is like telling an osprey to go fish. So on it goes, joy and grief, sprinting and waiting, light and dark; all good, all aspects of love.

It’s been a bumpy ride.

My wife Ann, my beautiful one-and-only for over 40 years, has had stage IV lung cancer since 2015. After a very successful (as these things go) run of 2 years on the initial therapy, the 2nd therapy failed and the cancer has advanced considerably. She just started “conventional” chemo–the kind where your hair falls out and a common cold can land you in the hospital–and we are working to figure things out.

Then in December our first grandchild was born. She and her awesome parents live with us, so we are getting the deluxe grandparent experience. All of the red hair that skipped a generation or two made a grand reappearance in Lucia Noelle.

That deserves a fist bump…

I will be staying close to home for the foreseeable future, sending best wishes (and a few new ukes) as friends attend festivals this year. Sorry to miss seeing/meeting you in person this year! I may zoom over to nearby Bend for Uke U-7, but we’ll see at it gets closer.

Ukes ARE being built, though the pace is even less predictable that usual…and as my wonderful and patient commission customers know, that’s pretty darned unpredictable. I apologize for the slow pace, but feel that meticulous care is essential no matter what the circumstances.

In an experiment, I’m allocating a few more build slots to non-commission instruments; in my dreams this will result in the occasional instrument available to purchase immediately. Admittedly it hasn’t worked that way yet, but the year is young.

The Instruments page is usually fairly up to date on what is in the pipeline, and Facebook and Instagram have periodic pictures. Here’s one: White Tree, a moonspruce/blackwood Lyric tenor with inlay by Larry Robinson.

Sour gum, Red Sunset, Chinese pistachio, Stewartia, paperbark maple–my ministering angels of autumn. Their colors in the slanting sunlight are like blessings over my head, at my feet, swirling all around me in the wind.

A highlight this season was delivering James Hill‘s commission, the Swiss spruce/African blackwood tenor River. In a near mythic alignment, the handoff took place alongside the Salmon River, where he, Anne, and Alder were staying before Melany Berry’s wonderful Tunes in the Dunes festival.

Since then I’ve been working like crazy to prepare instruments for the Ukulele Guild of Hawaii Exhibition–a giant invitational gathering of ukes and makers at the Princess Kaiulani Hotel by the Waikiki beach, with workshops, kanikapila, and attendees from around the world. The tenor ukes Panther, White Tree, Anduin, Brandywine, and Evenstar have been making preview appearances on Facebook and Instagram.

Early July 2017: Finally! The fair season that lures unsuspecting souls to our green (and rainy) paradise has arrived, and it is glorious. Twilight lingers past 10pm, then appears barely 6 hours later with an extravagant songbird chorus (plus roosters, in our neighborhood).

Linden trees perfume the pre-sunrise stillness as I write this; Ann’s fragrant roses will take over when the day warms, while in the shop the fragrance is all Brazilian rosewood. I’ve been carefully preparing several 50+ year old sets, so well seasoned and resonant they sing under the tools.

Brazilian has a near magical reputation, and sets like these–straight, dark, fine textured quarter-to-rift wood from the main trunk–have become very scarce; when you see D. nigra at all it’s usually flatsawn stump-wood, which I avoid because of its famous propensity for cracking.

But whoever sawed these sets long ago wasn’t feeling the magic, nor anticipating how precious they would be someday; the saw lines wander crazily. Too irregular for machine tools, I’ve been coaxing these down with handplanes. Oh darn (I love planing).

Which brings us back to fragrance–Brazilian helps you to understand why they were called “rose”-woods. Sadly the fragrance will fade, but these instruments seem destined to have–as my voice teacher once said of an English art song–“the smell of the rose”.

Look for at least one of these at the Ukulele Guild of Hawaii Exhibition in Honolulu this November. In the meantime the Bend Ukulele University is coming fast–back to the workbench.

Late March 2017: Our snowy freezing-rainy winter does not want to give up, but the lengthening days tease with the promise of spring, and the lawn mower woke from hibernation last week.

The Palm Strings Ukulele Festival was a blast. I arrived in something of a crabby mood after two hard days of driving in wintry weather, walking into the venue just as Michael Powers, Abe Lagrimas, and James Agg took the outdoor stage–the healing effect of their set was nothing short of magic. They simply rocked the place; the wind that blew cups off the table and whipped away the flames of the outdoor fireplace were no match for the music blazing from the stage.

Along with James Hill and Anne Janelle, Peter Luongo and his hardy band of ensemble stalwarts, and several others, Doug Reynolds once again put on a great event.

Looking back to late fall, the Exhibition of the Ukulele Guild of Hawaii was wonderful! Between the Guild organizers, fellow exhibitors, and attendees, it was a lesson in aloha and shared enthusiasm.

I also spent time with Andrew Kitakis and the rest of the great Ukulele Site/Hawaii Music Supply gang up on the north shore before the exhibition, nearly spraining my neck from turning around so fast when Corey Fujimoto started playing the first movement of the Bach Violin Sonata in E major on Reynard–Wow/ouch! I will be supplying instruments to the Ukulele Site and to Shawn Yacavone of Ukulele Friend later this year.

Returning to the present, in a week my daughter Meghan and I will be off to the Reno Ukulele Festival (Gerald Ross, Victor and Penny, Abe Lagrimas, Michael Powers, Peter Luongo, Steve Espaniola, Faith Ako, and more–whew).

Closer to home a few weeks later,  the Northwest Handmade Instrument Exhibit at Marylhurst is absolutely stuffed with superb work by luthiers all over the Pacific Northwest.

July beckons with a double-header, the Bend Ukulele University, and (for us geeks) the Guild of American Luthiers (GAL) convention. Speaking of the GAL, I recently had an interview with Corvallis violin maker Jeff Manthos published in the American Lutherie.

OK, enough for now. Here is the list (as always, possibly out of date) of some of the finished and unfinished ukes in the shop, all tenor unless noted:

The sour gum trees have more brilliant scarlet leaves scattered below than remain on the branches, and I fear one good windstorm will un-decorate the entire autumn display.

But any autumn melancholy was more than offset with Kimo Hussey’s workshop/concert late September, and the Port Townsend Ukulele Festival only days later, an extraordinary gathering of teachers/performers and students.

I’m now preparing for the Ukulele Guild of Hawaii Exhibition–a giant invitational gathering of ukes and makers just steps from the beach at Waikiki, with workshops, kanikapila, and attendees from around the world.