What exactly does one carry for 100 days on the trail?

At little as possible–you’re cartin’ this stuff on your back!

Then again…as much as it takes to be happy, and reasonably comfortable and safe. And therein lies the rub…literally: the shoulders, hips, neck, back, and soles of the feet all have opinions about weight, and those opinions get sharper as the day progresses. A skimpy little day pack hardly matters, but over 10 or 15lbs a pack starts to be noticeable. The difference between 20 and 30 is abrupt–at 20 (with a well fitted pack) it still feels like a pleasant stroll, but at 30 the word toil comes to mind. I used to carry 40-60lbs regularly (including food), and toil didn’t begin to describe it!

I’ve spent a lot of effort trimming down my pack to make this trip possible. Sometimes this simply involves finding lighter gear with comparable functionality, but often it goes deeper. A pack offers a glimpse into one’s closet of fears; decades ago I was stuck in the snow, so cold that my legs repeatedly went numb for two days. For years afterwards I carried a 7lb tent, heavy rain gear, and numerous warm layers of clothing–and still stressed out when the weather hinted rain.

To this day I carry a stouter shelter and more warm clothing than many long distance hikers, but I’ve learned a bit about staying warm and dry so it’s much reduced. Here is my “stately pleasure dome” for this trip: 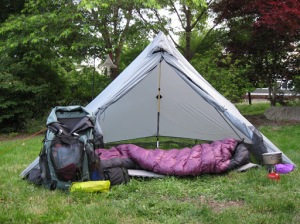 Warmth was much on my mind one winter night years ago when I joined an intrepid group for a night outdoors in the Cascades without tent or sleeping bag. The weather was dreadful, high winds with snow and freezing rain, so my partner and I dug a snow cave, the king of winter shelters. We were beautifully protected but nevertheless absolute popsicles despite roughly 20 layers of clothing, many times what I would realistically carry on a trip. Only one of our number had a decent night, in a crude shelter no less. His secret? Warm drinks every 90 minutes or so. While some long distance hikers forsake a stove and therefore warm food, I remember that night and carry a 3 ounce stove.

That scary snow experience resulted from a series of misjudgments and careless mistakes, which brings to mind a fellow hiker named Scott Williamson. He has hiked the entire Pacific Crest Trail (henceforth PCT) nine or ten times. I expect to see him on the trail this year as he attempts a record walk, covering the nearly 2700 miles in 66 days, averaging 40 miles per day. When Scott was asked what his favorite piece of gear is, he replied “My brain. It’s free and it’s always helped me out of jams”. Scott travels very light, probably less than 8lbs of gear total–yep, that’s the pack and everything in it except for food and water. Amazing what you can do w/skill and experience.

I don’t have as much of either, and no surprise my pack is heavier – about 13-14 lbs, but much nicer than the 30+lbs carried by the normal backpacker. A few points of comparison:

And on it goes. This gear represents a set of tools that I feel confident I can stay safe and comfortable with today. As the trip progresses perhaps it will shrink, but we shall see. Many people go out each year w/gear and experience that don’t match even the most optimistic scenarios, and that is plain wrong–it is shifting the risk to other hikers and the rescue community. While anyone can get in over their head, it’s essential to cultivate personal responsibility.

Clothing is an area where experienced hikers can often prune weight. During the day I’ll wear light colored synthetic pants and long sleeved shirt, sun hat, and boots or running shoes. The pants zip off to become shorts for warm weather, but the long sleeve shirt stays on to control sunburn, as I’ve already had one round of skin cancer. In a handy outside pocket of the pack I have the 5oz windbreaker (amazingly useful), light gloves, and a 5oz spun-bonded raincoat, very waterproof and breathable (and only ~$20!). Carefully double bagged to stay dry in the pack (important!) is the insulated jacket, balaclava (warm hat that covers neck), and spare socks, along with running tights and a featherweight synthetic t-shirt to wear at night to keep the sleeping bag clean. Like this… 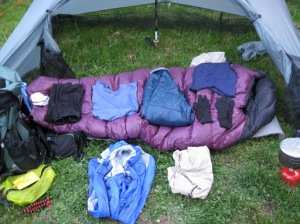 This is close to twice the clothing of the hard core ultralighters. It probably doesn’t sound like enough, but it’s possible to be very comfortable with this kit. You do have to come to terms w/more dirt than is normal at home, but that doesn’t mean being Pig-Pen. Not for too long, anyhow; some stretches of trail are so dusty it’s unavoidable for some period, but in general frequent washings allow you to live happily with yourself and your trail companions.

One gear area that drives me crazy is first aid/repair/emergency. It has so many little things to debate the necessity of, and so much conflicting advice. Some hikers shun complexity and carry only duct tape, a needle, and hand sanitizer. Some barely stop short of a medevac helicopter. I’m in the middle, able to clean and dress wounds, manage pain, infection, allergic reaction and diahrrea, start a fire under adverse conditions, signal for help, and improvise repairs to more extensive gear or body damage.

This nominally adds up to 4 or 5 ounces, but in reality almost everything in the pack could play a role in emergencies. The aluminum pack stays could providing splinting for broken bones, the sleeping bag warmth to manage shock or hypothermia, dental floss for sewing, articles of clothing for padding or slings and so on. Multiple Use is important to assembling a light pack.

Another excellent example is the humble and ubiquitous backpacking ukelele: in addition to the soothing alpha-wave-inducing music, it is useful as a mosquito-swatter, a paddle (for either boating or spanking, as appropriate), a pillow–koa is among the most comfortable and compliant of pillow woods–and of course for self defense, driving off whackos by playing Tiptoe in the Tulips, or Paul Anka tunes.

I am reluctantly leaving behind a few favorite things in order to lighten my pack for the abundant miles: my faithful little Leica binoculars, one of my all-time favorite purchases and something I carry every day in my shoulder bag; the nifty fabric contraption that turns my sleeping pad into a chair, so comfy for sitting around camp – but with the long days I won’t have that much time in camp; and an ice axe…true, I haven’t carried one for years, but they are so cool! If I had left 3 weeks ago as originally planned I would have needed one, but that’s an extra TWO POUNDS. Good thing for all these delays.

Things I won’t do without include toothbrush and floss, washcloth, mirror (part of the compass, also good for emergency signalling), camera, cellphone (roadend use checking in w/Ann) and substantial quantities of chocolate.

One good friend asked if I would bring a gun, but it’s too heavy for a wimpy not-quite-ultralight (that would be under 10lbs for gear) backpacker. Besides, you folks out there in civilization need a gun more than I. However, if I happen upon a frozen mountain man with a .50 caliber Hawken, I will re-evaluate this decision carefully.

I’m up in the air about an mp3 player. I generally find hiking w/music distracting, like being stuck in a movie soundtrack, but it might be fun to listen to audiobooks or learn new tunes, and occasionally Led Zeppelin would be just the thing to get past a tough stretch. Probably not though.

This is probably more than you wanted to know, so I’ll stop before discussing toilet paper…or the lack thereof.