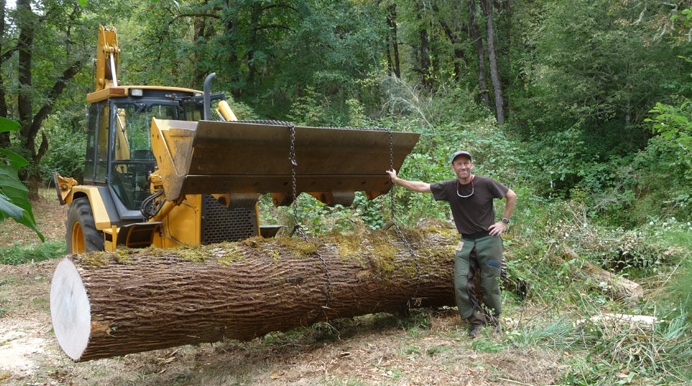 Hmm…last post early November…already blamed the dog for a previous hiatus–there really isn’t anyplace to hide for the lack of posts. So what’s been happening?

My furniture making past re-appeared after I completed the oakulele last fall, in the form of a very large dining table that had been in the wings for a few years as the wood dried. The adventure started here, with local sawyer Doug Pollock walking the plank–a beautiful Oregon ash that fell across a creek in the next valley west of us.

With a blend of calculation, artful rigging, and brute force he managed to get the log onto dry ground and cut it into pieces that could make the trip to his mill.

Bill Storch (who built the table with me) and I oversaw the milling, mulling over how each plank might be used in the table, guessing what would appear with the next cut, and what might happen during drying and subsequent operations. The best slabs were cut 3″ thick for the top, a few were over 4″ thick for leg parts, the center rail and smaller leg parts were 2 1/2″, and wherever possible we cut spares just in case. As each cut was made we flipped the plank over to read the underside, then stacked it to the side. They were reeeaaaalllly heavy.

Skipping over a couple years of drying, Bill and I got down to work as fall waned. Here is the final selection for the top, and you can see that even with our best guessing two years earlier, we ended up choosing a slightly thinner plank for one of the top boards. We flipped and move these porkers many times searching for the best composition, and they were still darned heavy even though they were now dry.

There was quite a bit of carving on the base. As with instrument necks, I did this at night with a single desk lamp illuminating the work; the raking light makes even small variations in the shape jump out.

Bill made hammer-textured steel straps for the stretcher, and we hired a couple of very strong movers to bring the top safely into the owner’s house. Everyone agreed that this table will hold up the pizza.

Whew! What a relief that instruments are nice and light. Still, it’s fun to design and build a piece that operates at an architectural scale, where the sweat is about shear exertion rather than whether my next move will blow up a 2 millimeter thick piece of precious and irreplaceable wood!

There’s a whole lot of this tree left–anyone looking for a uke in Oregon ash?