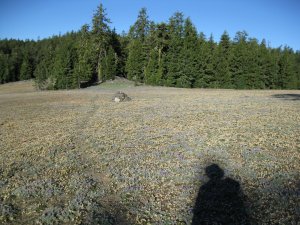 OK, it hasn’t been as bad as the cowboy song paints it, but “For three or four hours I didn’t snack, along the track, because my pack had no water–Cool Water. The Fritos sat, no good to Pat, too much salt and fat, without water–Cool Water” just doesn’t make the grade.

So where’s the water coming from? So far it’s been very different from past trips where lakes and streams have been the main sources. Since the trail stays near the ridge tops many water sources have been springs–he very beginnings of creeks and ultimately big rivers. I have drunk from headwaters of the Klamath, Scott, Salmon, Trinity, and Sacramento rivers, often just a few feet from where the water comes out of the ground–mmmm!

All springs are welcome, but few were more anticipated than this one below an abandoned lookout near Devils’s Peak in far northern CA. I had hiked several miles since a 5:30am start w/out seeing any water I liked, and was facing a rapidly heating 4400 foot descent. Only minutes earlier I had encountered a rattlesnake which had further dried my throat, probably from jumping several thousand feet into the air. This tiny oasis under Doug firs was just the ticket. The trickle was quite small, taking minutes to fill a liter bottle, but eventually it could fill containers faster than I could drink, so all was well. I stayed here for quite some time listening to the birds, which are often one of the clues that water is near.

A few days later I came upon this idyllic spot in the Salmon Mountains, and lingered for hours soaking it up (and soaking my very mosquito-bitten feet). Some years ago a trail crew building a new section of the PCT had camped nearby for 3 months, and the rockwork specialists had taken special pains where the trail crossed their home creeklet, which originates in snowfields just above. This place will stay with me for a long time.

Another spring pops out just feet from the trail. Sometimes they are literally underfoot, though I feel better when the originated on the upslope side of the trail. 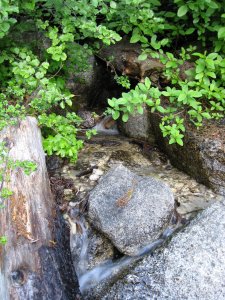 Here is a welcome sight, with spring written all over it…

…and sure enough, tiny but vigorous, cold, delicious, and decorated with monkeyflowers–what’s not too like? With sources like this I do not treat or filter the water. It is interesting how different the waters can taste from the various rock formations.

Nearing the end of the Klamath Mountain section was a series of creeks draining the great granite mass of Castle Crags, sluicing down chutes and carving out bowls along the way. Very pretty but I was more cautious taking water out of these as they originated further upslope.

Wait a doggone minute, what is this doing here?

Ah, yes, well…after the Klamaths I was staying with the very hospitable trail angel JoAnn Michael in Weed CA and contemplating how I might sleep better through the frequent warm nights, during which mosquitoes conduct repeated raids on my tentless camp. Deciding that fetching my tent was in order and that a Greyhound bus ticket home was cheaper than mailing things, it was a pretty easy call–Ann and the kids, friends, Cirello’s pizza, good coffee, such a life.
However there have also been issues with banking, plumbing, the woodwork business, garden, vehicles, and so on, reminding me that is not trivial to achieve escape velocity. Already it has taken a day longer than what appeared to be a generous schedule–but then again more time with family and home has its rewards.
Tomorrow I depart for Lassen.