The Mid-Willamette Woodworking Guild Show is up and the dining table made it in, but it was a sprint to the finish–and with the finish, as I was applying oil/varnish only hours before stuffing the table in the van. Dry finish, dry I say!

Picking up after the glue up (and the close of Cabaret), next came the inlay process. I was originally planning to inlay rosewood, but a billet of Macassar ebony that has been lurking in the shop for 16 years had some curvy figure that looked promising, so I sliced of a 1/8″ thick piece on the bandsaw and cut it into squares. I then laid out lines with a scalpel so the inlays would land right over the table legs, hogged the bulk of the material out freehand with a router (after burning a couple hours on a router template that was not satisfactory), and cut to the lines with chisels. Love those chisels!

Then it was time to level and smooth the top, a real extravaganza of fluffy shavings. I had to sharpen frequently to avoid tearing out the reversing grain of the quilted cherry, and it turned out splendid–thankfully, because it was a ton of work. 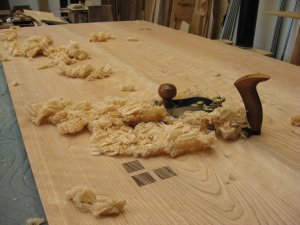 Some of the Macassar inlays planed nicely in the same direction as the cherry and some did not, but there was no way around this if the curves were to flow nicely. Needless to say I lost track of direction and created tearout in some inlays. A card scraper saved the day, to me the most amazing tool in the shop; a seemingly unremarkable flat piece of steel that performs miracles. It deserves its own post some time.

My friend and helper David planed part of the underside of the table, and he is now heading down the road to handplane addiction. The shavings are so lovely, and when you take a clean pass over this cherry it looks as if someone turned on a light bulb inside the wood – the figure and color jump out! Hogga Dogga!

On to the edge profile of the table top, but is a sweetly curving bevel enough? No, or course not. We have Lots of Time, let’s carve a detail into each side as tribute to my teacher Kevin Rodel, Arts and Crafts designer and maker extraordinaire, with whom I studied at the Center for Furniture Craftsmanship some years back. 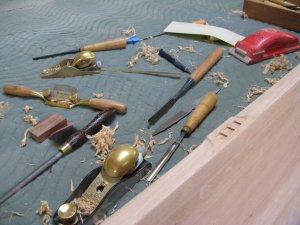 At this point the top was ready to start sloshing finish on, and it was time to construct the base. Since everything readily visible was built from four sequential 5/4 planks from a single tree, the first step was milling and gluing up blanks for the legs and other thick parts. Daughter Meghan stayed late that night to keep me on task and lend a hand. Another day she brought me Cirello’s pizza–Love you Meg!

Then some killer joinery–I want thing thing as solid as a rock for centuries. Some was cut at the tablesaw

but a lot had to be done by hand. More fun with chisels.

There is a good bit of joinery going on here, and it came out nicely; the mortise and tenons give a satisfying POP when pulled apart, like a champagne cork.

With the joinery complete it was time to refine and detail the shapes. The big curving stretchers were bandsawed, spokeshaved, and finally sanded into soft fair curves. It was a huge workout with time running short and made a humongous mess in the shop, but for me these give the ooh-la-la to the table. Straight stretchers would have been easier, but that wouldn’t have been The Cowboy Way.

I shaped the legs with router, tablesaw and handplane into a highly abstracted flower form (that’s how I see it, anyhow). The grooves on each face have nice soft inside edges, not the hard right angles that a typical router bit or saw would make. 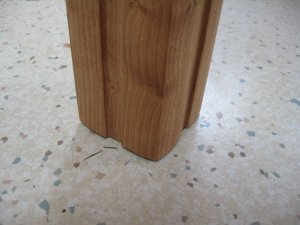 Yikes, only a couple days until the show, and nothing is glued up yet. I applied a coat of oil/varnish and urged it to dry more quickly by setting it in the sun on an unseasonably warm day…which caused little beads of oil to keep forming on the surface. Nice try. At least by finishing before glue up the few little beads of glue squeeze out were easy to remove and there were no pale splotches where the finish couldn’t penetrate.

Here is the end subassembly finally glued and clamped, with fancy cauls that David made to handle the curving stretchers.

While doing a dry run of the glue up I managed to install one curving stretcher upside down (don’t ask), which slightly compressed the shoulders around the sliding dovetails. So next morning (30 hours and counting) I had to “dust” the joints, and it is euphemistically called by some; putting something sticky into the hairline gap (I tried oil/varnish, it worked OK) and then working in some sawdust. Tick tock, another 90 minutes, but at least the joints look as good as before I dry-fitted that piece wrong. Almost. Well, not really, but better than undusted. Arghhh. Most people would have needed a microscope to see the gap even without dusting, but this is one of the curses (or blessings) of my severe near-sightedness – take off my glasses and I can see really fine details. On through the day and into the night refining detail after detail.

Morning, 8 hours until delivery. Dry assembled everything and it is solid as a rock without glue–decided not to glue long stretchers in place in case I want to refine more details after the show, which will be easier if the end assemblies can be handled separately. Made cleats of hard maple to attach the top to the base. Flipped the top upside down, positioned the base, making sure it lined up with those inlays!

Then a scary step – drilled into the underside of the top to attach the cleats. Drill too far, and there will be a nice hole in the table top, just about big enough for a single stemmed rose. From my funeral bower. Bad idea, must not drill too far!

It’s a table. And I’m exhausted.