Skip to content
I set out this summer to walk alone some 1000 miles through the Sierra Nevada backcountry, a plan built of hero worship, inspiration, gluttony, and a hint of desperation.

Colin Fletcher wrote “The Complete Walker” in 1968, and his ideas assumed near-mythic status in my eager teen mind. At the core of his walking and writing was this:
“Many experienced outdoorsmen – and all responsible hiking organizers – contend that the greatest danger in wilderness travel is one that permeates this book:
Walking alone.
They may have something too. But once you have discovered solitude – the gigantic, enveloping, including, renewing solitude of wild and silent places – and have learned to put it to creative use, you are likely to accept without a second thought such small additional dangers as the solitude imposes.”
In hundreds of subsequent pages he imparted the means—well-honed, intricate, even charming—but I imprinted on hisessence: real walkers walk far, in solitude. Fletcher also wrote “The Thousand Mile Summer”. You can see it coming…
Some ten years earlier, following a precipitous one-lane descent to Devil’s Postpile in my grandfather’s giant blue Cadillac—including being run off the road once—I had imprinted on the textures and currents of the young San Joaquin River and the Sierra Nevada mountains, John Muir’s “range of light”. How can one notwish to soak in every corner of this magical and extensive kingdom? Inspiration and gluttony are eminently sensible responses.
Wikipedia informs me that Fletcher was 36 on that epic summer walk up California. I suppose I should feel better now. Humph. For several years I have noticed backpackers my age being pruned out of the backcountry, seemingly with little warning; an injury or illness, a trip with too many grueling ascents under a leaden and sweat-soaked pack, even demon golf. ALERT! Time Running Out!
And so out I went. 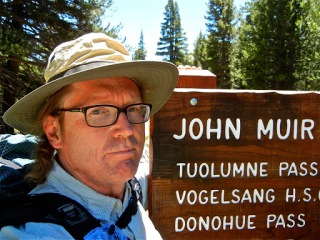 I chose the first leg with moderate mileage and elevation change compared to my 400 mile hike in ’09: from Tuolumne south to a quiet corner on the edge Yosemite where the Merced River arises, then north and west as it swells (and hosts a prodigious quantity of mosquitoes), and finally zig-zagging to an airy bivouac on the summit of Cloud’s Rest, 6000’ above the floor of Yosemite Valley.

Those 6 days and 60 miles were a flash flood of experiences, I’m still awash in it. That’s good, because the miles also devoured my knees; there’s plenty of time for reflection.
On the final descent into Tenaya Lake I summoned maximum grit when passing oncoming hikers so they wouldn’t stop me and call for a rescue. In retrospect they were probably occupied by their own suffering, but I was moving so slowly and awkwardly it was embarrassing. On the return shuttle bus my kneecaps threatened to burn right through the skin. I’ve been here before, just before my surgeries when I toasted my knees reffing too many soccer games. A few days of lounging and care only confirmed that I needn’t restock the bear canister with food for the next leg.
I texted my nieces Jen and Nicole about going to their favorite Irish bar in Sacramento—to learn to drink whiskey. Pub crawling in Ireland seemed like a hiking frontier still within reach, and if not the whiskey would provide a fuzzy glow, so WTF. I made a last very flat walk in the 90 degree morning air of Yosemite Valley, drank from an ancient spring for luck, had a pastrami sandwich at Degnan’s for old time’s sake, and headed out of the mountains to Sacramento.